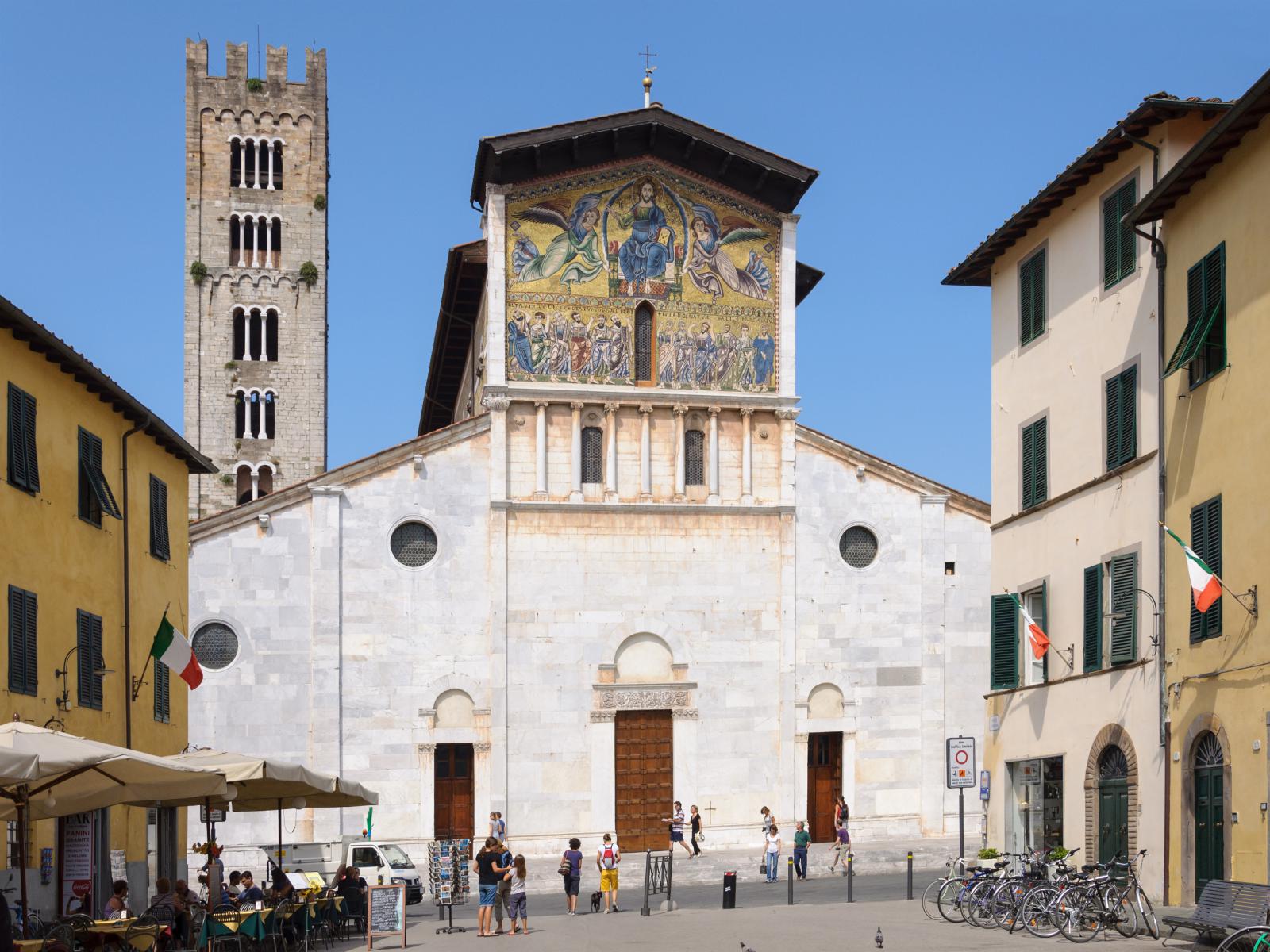 In this area outside the original Roman walls and near the Amphitheater, at the end of the 4th or beginning of the 5th century, was built the ancient church of SS. Vincenzo, Stefano and Lorenzo with its adjoining cemetery. In the 8th century a crypt was built to deposit the relics of St. Frediano, an Irish monk who became bishop of Lucca (between 560 and 588) who performed the miracle of diverting the river, saving the city from floods.

In 1116 the construction of the present church began, dedicated to S. Frediano and consecrated in 1147, which represents a beautiful example of Romanesque architecture in Lucca: the three-nave basilica plan with an apse but without a transept refers to the early Christian churches. In the thirteenth century the church was raised and the mosaic on the façade was placed on a faux loggia with a classical entablature: the golden background depicts the ascension of Christ between two angels, above the apostles who stood at the sides of Mary, now disappeared to make room for the central single lancet window.

The white limestone facade has three portals, three single lancet windows and four oculi and is marked by pilasters that divide it into five parts, corresponding to the new internal division into three naves plus two rows of side chapels. The sides of the church are in stone alternating with rows of white marble. On the back you can admire the apse embellished by the fake loggia, taken from the facade, and by two rows of three mullioned windows. On the side stands the bell tower, whose base is prior to the XII century, while the elevation, finished in the XIII century, is characterized by the growing number of openings.

From the end of the 14th century the most important families of Lucca had the numerous chapels in the side aisles embellished: among the many masterpieces that decorated them we remember the works of Iacopo della Quercia in the Trenta chapel, by Amico Aspertini in that of S. Agostino, and the fresco of the Madonna and Child, now placed above the Soccorso chapel, but originally part of the thirteenth-century counter-facade.

The glazed terracotta of Mattia della Robbia, originally in S. Romano, was brought here after the Napoleonic suppressions. In the church are preserved the body of San Riccardo and S. Zita, much loved by Lucca citizens. Next to the church there are the rooms that hosted the monastery several times enlarged over the centuries, which in the Middle Ages was a very important center for the spread of the Gregorian reform.